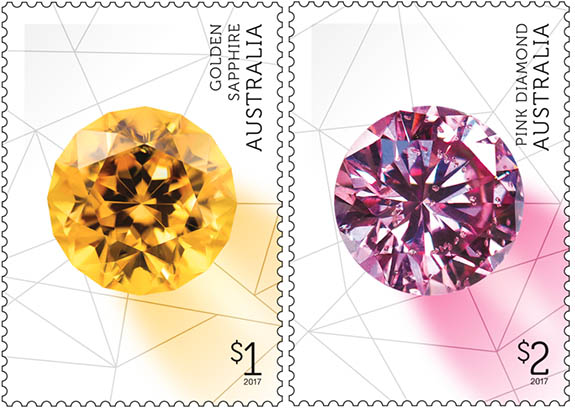 What all four gems have in common is that they are housed in the mineral collection of the Australian Museum in Sydney.

Australia Post clarified that two of the gemstones — the golden sapphire and the pink diamond — represent stones that are cut and polished to be used in precious jewelry, while the rhodonite and fluorite are valued more often as “collector stones.”

The 7-carat golden sapphire shown on the $1 stamp has been in the Australian Museum collection since 1984. The original rough stone was mined near Anakie, Queensland.

“The color is intense and the stone is quite large,” gem specialist Gayle Sutherland said in an interview with Australia Post Collectables. “It’s a stunning stone. The cut has emphasized the depth of color, while ensuring the stone is lively and brilliant. This stone comes from an area in central Queensland that is renowned for its fine golden sapphires.”

One of the two $2 stamps honors Australia’s role as the world’s most prolific supplier of pink diamonds. The material comes primarily from the Argyle Mine in the East Kimberley region of Western Australia. It is believed that pink diamonds owe their color to the effects of intense pressure and heat while they were still deep within the earth. These factors caused distortions in the diamond’s crystal lattice that influence the way the diamond absorbs green light, thus reflecting a pink hue. 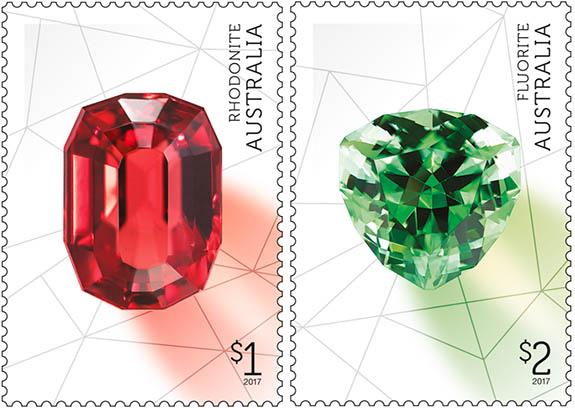 The rhodonite shown on the $1 stamp became part of the Australian Museum collection in 2002. Weighing more than two carats, the material from which it was cut came from Broken Hill, New South Wales.

“The rhodonite is remarkable for its rich red color combined with transparency,” said Sutherland, who co-wrote a prestige booklet as part of the stamp issue. “Rhodonite is commonly a pink, opaque material suitable for carving. This stone is from… one of the few places in the world where rhodonite of such quality has been found. This material is now only available from old collections.”

Australia Post noted that the fluorite on the $2 stamp is a perfectly faceted stone weighing 147 carats. It was cut in 2001 from a rough gem that has been part of the Australian Museum collection since 1918. The material originated at Rumbsy’s Mine in New England, New South Wales.

“The fluorite is a gemstone for collectors,” added Sutherland. “Its beauty is fragile, and this stone needs particular care whenever handled and displayed.”

The release of the gemstone stamps is perfectly timed to coincide with the dates of the Melbourne 2017 International Stamp Exhibition, which is scheduled to run from March 30 to April 2.

The four stamps were designed by Gary Domoney of Visua, a Melbourne-based visual communication and brand strategy agency.