A little over five years ago, the 25.59-carat pigeon-blood-red “Sunrise Ruby” rocked the auction world when it obliterated two auction records at Sotheby’s Magnificent Jewels and Noble Jewels sale in Geneva. The hammer price of $30.4 million exceeded Sotheby’s high estimate by more than $12 million and set a new auction mark for the largest sum ever paid for a ruby. 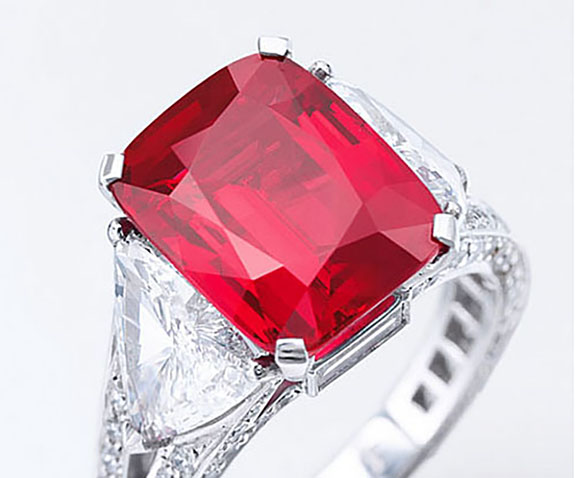 The stone, which was set between two shield-shaped white diamonds in ring designed by Cartier, also established a new high-water mark for the highest price-per-carat ever paid for a ruby ($1.19 million).

Today, the cushion-cut Sunrise Ruby has its own Wiki page and is celebrated as one of the world’s finest examples of July’s birthstone.

This writer remembers watching the drama unfold in real-time via a video feed embedded in Sothebys.com website.

As the evening’s final lot — #502 — was announced at the podium, the room was abuzz with excitement as a dark-haired model in an elegant black dress neared the podium wearing the Sunrise Ruby on the ring finger of her right hand.

Bidding for the Sunrise Ruby started at 11 million Swiss francs (about $11.8 million) and moved steadily upward during a seven-minute battle between two phone bidders, one of whom prevailed with an offer of 25 million francs. (The final price amounted to 28.5 million francs, which included the Buyer’s Premium of 13%.)

“A new record price for a ruby,” bellowed David Bennett, the chairman of Sotheby’s international jewelry division, as he brought down the hammer and the live audience broke loose in applause.

In a subsequent interview, Bennett explained that “during his 40 years in the industry, he has never before seen a ruby of this caliber.”

A Sunrise Ruby grading report by Gübelin explained how rubies of this quality are generally found in small crystals.

“Based on our records,” the report noted, “we can conclude that a natural ruby from Burma of this size and color is extremely rare. Thus, the described gemstone with its combination of outstanding characteristics can be considered a unique treasure of nature.”

Since the late 15th century, Burma, particularly the region around Mogok, has been a vital source for high-quality rubies. The area, known as the “Valley of Rubies,” is regarded as the original source of pigeon’s blood rubies.

Ruby is the red variety of the mineral corundum (aluminium oxide). Corundum in other colors is called sapphire. The word “ruby” comes from “ruber,” which is Latin for “red.” Rubies gets their color from the element chromium and boast a hardness of 9.0 on the Mohs scale. Only diamonds are rated higher at 10.0.

In addition to Burma, the coveted red gems have been sourced in Thailand, Afghanistan, Australia, Brazil, Colombia, India, Namibia, Japan and Scotland. After World War II, ruby deposits were discovered in Madagascar, Nepal, Pakistan, Tajikistan, Tanzania and Vietnam. In the U.S., rubies have been found in Montana, North Carolina, South Carolina and Wyoming.