Superman fans may remember how the Man of Steel crushed a chunk of coal into a diamond in 1983’s Superman III. While the superhero’s legendary feats of strength are fanciful, his foray into the world of fine gemstones is not as far-fetched as it seems. You see, coal is made from carbon, and pure carbon — under the right amount of pressure and heat — can be transformed into a diamond. 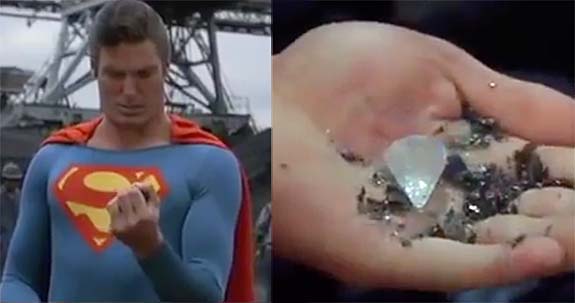 Scientists have long theorized how simple carbon might be turned into the most precious of gems by somehow duplicating in a lab the phenomenon that occurs naturally deep below the earth’s surface.

In her new book, Genuine Fakes: How Phony Things Teach Us About Real Stuff, historian Lydia Pyne recounts the experiments that led to the first lab-grown diamond at General Electric’s Research Laboratory in Schenectady, NY, in 1954.

Pyne explained how a revolutionary vertical hydraulic piston invented by American Nobel-winning physicist Percy Bridgman in the 1940s allowed for future scientists to generate the pressure necessary to conduct their carbon-to-diamond experiments. 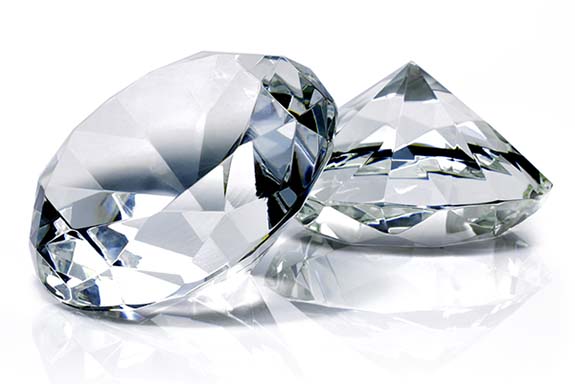 Bridgman’s piston — affectionately called “The Bomb” — could produce 4,200 atmospheres of pressure. Legend has it that the scientist’s lab at Harvard had holes in the walls, evidence of the power of the machine and dangerous experiments gone awry.

At General Electric, the super secret effort to create diamonds in a lab was code-named “Project Superpressure.” In early December 1954, scientist Herbert Strong conducted Experiment 151, where he deposited into a pressure cone a carbon and iron mixture, along with two small natural diamonds to seed the crystal growth. Building on Pyne’s work, GE developed a cone that delivered 50,000 atmospheres of pressure and generated a temperature of 1250°C (2282°F).

Strong ran the experiment overnight, and the next morning removed the two seed crystals and a blob of the iron-carbon material. Strong instructed GE’s metallurgy division to polish the material, but that was an impossible task because it was destroying the polishing wheel. The only element that could defeat the wheel was a diamond.

According to Pyne, X-ray analysis confirmed that Strong’s experiment had produced a lab-grown diamond.

About a week later, fellow researcher Howard Tracy Hall performed a similar experiment using a high-pressure press called a belt. Two diamond seed crystals plus carbon and iron sulfide were placed in a graphite heater. This brew was heated to 1600°C (2912°F) under 100,000 atmospheres of pressure. Thirty-eight minutes later, octahedron diamond crystals emerged from the belt.

In the weeks that followed, GE researchers were not able to duplicate the results of Strong’s experiment, but were able to replicate Hall’s success.

GE published the results of its ground-breaking work in February of 1955, just over 65 years ago.

You may read an excerpt of Pyne’s book at Science Friday’s website.