Carly Boyd and her beloved grandpa, Shelton, are media sensations today because of a tender moment captured by the staff of a nursing home in Lake Waccamaw, NC. 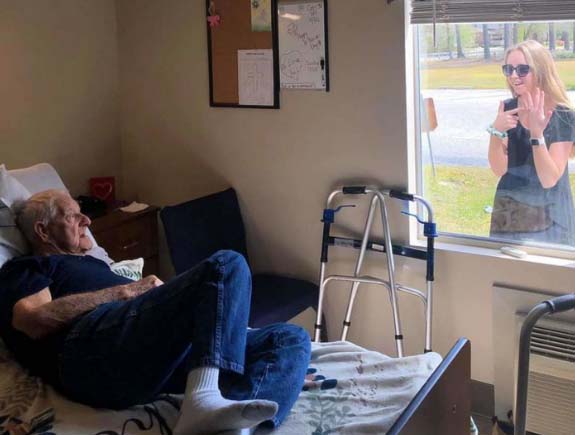 Carly had gotten engaged over the weekend and was determined to share her excitement with Shelton even though the facility was prohibiting guests due to precautions related to the coronavirus.

“I really wanted to be able to tell my grandfather because he has dementia and there’s no phone in there that he has access to,” Carly told CNN affiliate KOLD. “I just really wanted to make an effort to tell him.”

Although Carly was not allowed to enter the facility, she was encouraged to do the next best thing. 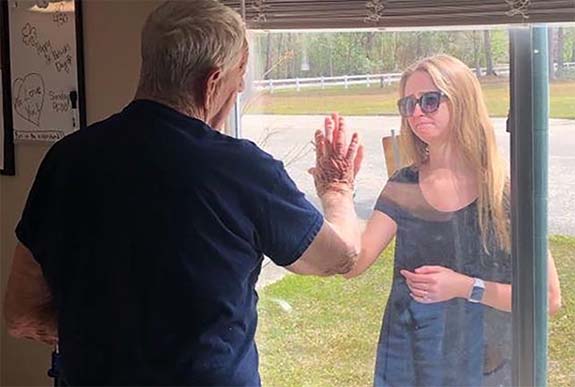 Gennie Parnell, the administrator of Premier Living and Rehab Center, took two memorable snaps of Boyd standing outside her grandpa’s first floor window. The first shot shows Boyd excitedly pointing to her diamond-adorned ring finger as she tries to get her grandpa’s attention. The second shot depicts the tender moment when they press their palms together, separated by the pane of glass.

“It was magical, I can’t even explain it,” April Bass, the community activity coordinator at the facility, told local NBC affiliate WECT. “I was in tears, my administrator was in tears, even the roommate of the resident, he was even crying. It was very magical and it was very heartfelt, and Carly started crying and her grandfather even started crying. It was beautiful and heartbreaking at the same time.”

“It was very special,” Carly told KOLD. “I just put my hand on the window, and he put his there too. I just told him I love him, and he said, ‘I love you, too, and I hope to see you soon, like really see you.'”

With the permission of the Boyds, the nursing facility posted the photos to its Facebook page, with the caption, “Even though visitation is restricted at this time, staff suggested an alternative. Here, a resident’s granddaughter tells her grandfather that she’s engaged! Emotional and memorable, for sure!! Thank you for allowing us to capture this special moment!!”

The post was punctuated with two emojis, a heart and a diamond ring.

The local story got national attention when it appeared on the sites of both NBC’s Today show and CNN.

Carly Boyd attends Southeastern Community College, where she is studying to become a Registered Nurse. Her new fiancé, Trevor Sellers, is a contractor with the Department of Transportation. Their marriage is planned for 2021.