The Washington Nationals unveiled the design of their 2019 World Series rings during a video presentation on Sunday night. Featuring 257 gemstones weighing a total of 23.20 carats, the 14-karat white and yellow gold rings document the team’s unlikely road to the championship after starting the season with a 19-31 record. 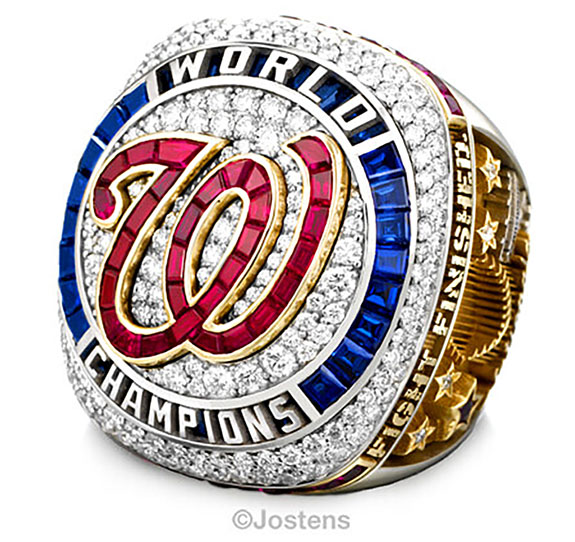 The team had been enduring a miserable slump when outfielder Gerardo Parra chose “Baby Shark” as his walk-up song. Parra picked the popular children’s song because his two-year-old daughter loved it, and so did the fans. The adorable tune — “Baby shark, doo doo doo doo doo doo”— had a way of galvanizing the energy in the stadium and the players used that energy to finish the season 96-69. 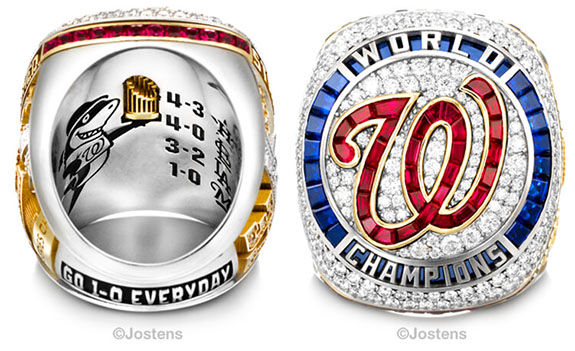 As a nod to the song that helped to turn their season around, the Nationals asked ring designer Jostens to include a baby shark holding a yellow gold trophy on the inside of the band. To the right of the shark are the team logos of each of the opponents the Nationals defeated during their postseason journey, along with the results of each series.

The rest of the ring is brimming with symbolism, as well.

The ring top features the team’s “W” logo, crafted from 30 custom-cut genuine rubies framed in yellow gold. The number 30 was chosen because that’s how many runs the team scored in the four World Series games in which they were victorious.

The logo overlays a ground of 58 pavé-set diamonds, and is circled with the words WORLD CHAMPIONS and 32 custom-cut genuine sapphires. The  number 32 represents the sum total of the team’s 2019 walk-off wins (7), shutout wins (13), longest winning streak (8 games), and playoff rounds won (4).

An additional 108 diamonds are featured along the ring top, representing the number of regular season and postseason wins (105), plus one diamond for the World Series Championship, and an additional two diamonds as a nod to the duality of the franchise’s history. The Washington Nationals originated as the Montréal Expos. The top and bottom edges of the ring top each feature 12 princess-cut rubies, representing the total number of postseason wins. 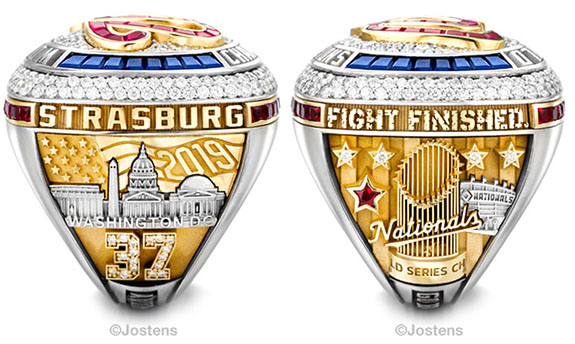 On the left side of the ring in raised yellow gold is the player’s name. Beneath the player name, also in yellow gold, is the nation’s flag waving majestically, along with the 2019 championship year date.

In the foreground, in contrasting white gold, are some of the U.S. capitol’s most iconic buildings and monuments, including the Lincoln Memorial, Washington Monument, Capitol building and Jefferson Memorial. The bottom of the ring’s left side serves to display the player’s number, set in diamonds.

During the postseason, the team’s motto was “Stay in the fight.” The evolution of that motto is featured on the right side of the ring: “Fight Finished.” Below, the stripes of the American flag fill the sky above Nationals Park behind the coveted Commissioner’s Trophy, complete with the Nationals wordmark logo.

Also appearing on the right side are four diamonds set upon a star base, as well as a custom-cut, star-shaped ruby. The five stars represent the incredible five elimination games won by the Nationals in the postseason. The four diamonds on the stars represent the four previous National League East titles earned by the Nationals, while the red star signifies their World Series Championship.

The team’s mantra of “Go 1-0 Everyday,” appears along the ring palm.

The team voted to receive their rings when they can be physically united. The Nationals had originally planned to host a ring ceremony before the team’s second home game on April 4, but the season has been delayed due to the coronavirus.